Coronation Street is celebrating its 60th birthday, and the show’s flame-haired siren, Rita Fairclough (you can stick your Sullivans and Tanners and any other stupid names they’ve given her) is right where she belongs – in the thick of the action, and fighting to save her beloved Street.

Our Rita’s had more than her fair share of ups and downs over the years, and I firmly believe that her fortunes are tied to her hair colour. When times are good, her locks are bright. If things aren’t looking good, she goes dark and dowdy. Obviously I have SCIENTIFIC EVIDENCE to prove this hypothesis, all broken down and analysed, colour-by-colour. So listen, lady!

Well this isn’t a great start. Rita’s very first appearance in 1964 was in black and flamin’ white! How are we supposed to know what colour her hair is? I’ll tell you what though, she’s not been very adventurous with the shape over the years, has she? We first saw Rita Littlewood as was when she popped in to the Rovers and caught the eye of Stan Ogden.

It was 1972 before Rita made another appearance, and by this time they’d finally turned the colour on so we could see her ravishing red locks for the first time. This time around she was calling herself Rita Bates, and was even pretending to have a husband and a couple of kids, but that didn’t stop her setting her sights on local councillor Len Fairclough. It was to be an enduring partnership, if not an enduring hair colour.

Rita hasn’t always been a mild-mannered newsagent, you know – she used to be a club-singer-slash-belly-dancer, and you can see here that she preferred a brassier shade for her professional engagements at Weatherfield’s premiere nitespot, the Capricorn Club. And yes, she is about to claw that woman’s eyes out.

As the 1970s wore on, Rita’s hair took on its familiar, helmet-shaped form – and it became more and more ginger. Indeed, Hilda Ogden’s mop was so intimidated here by its carrot-like quality that it refused to come out from under her headscarf.

…bloody hell fire, this is a bit much, isn’t it? People up and down the land must have been giving their tv sets a wallop on the side, thinking the contrast was on the blink.

When mousey Mavis Riley joined her to work in the Kabin, Rita’s hair actually became 50% less lustrous, as a direct consequence of being behind the counter with mousey Mavis’s all day long.

By 1974 (yes, all those hair colours happened in just two years), Rita had plumped for a more sophisticated cut, and a muted tone – she was having an affair with a married man at the time, and was presumably trying not to draw too much attention to it.

But it was with Len that Rita’s affections really lay, and to celebrate getting together with him properly for the first time, she decided to venture into uncharted waters and go – gasp! – BRUNETTE.

She couldn’t resist rinsing a little bit of red through it for the wedding, though.

Life with Len wasn’t all it was cracked up to be, though. Rita was feeling dowdy and unappreciated, and it showed in her hairdo at the time. Even Ivy Tilsley had knocked through to the front parlour, and was rubbing Rita’s nose in the resulting swankiness. It was time for decisive action, and a honey rinse.

Things had brightened up by the time Rita and Len started looking into adoption, but their happiness wasn’t to last – Len was killed in a car accident. Rita picked herself up, dusted herself down and was soon back at Maison Renee with a headful of foils.

And WHAT a transformation. The dye-job Rita sported when she confronted new love Alan Bradley’s bit on the side was an early-80s marvel – there are at least 37 different colours in there, and none of them can be found in nature. In fact, we really need to see this one from the back to get the full effect.

Rita’s 1986 ‘do was both psychedelic and psychic. It had the power to predict the future – and even foresaw a time when we would all be talking about her hair on social media.

Not that Alan Bradley appreciated Rita’s efforts, of course. She found out he’d been using the late Len’s identity to remortgage her house, and when she found out she immediately confronted him, stopping off only to get Audrey Roberts to touch up her roots in the dodgy salon she was running from her front room at the time.

Poor Rita suffered a breakdown after Alan tried to kill her, and went to hide out in Blackpool. He soon tracked her down, and it was a real shock at the time to see Rita with no make-up and her tresses unteased.

There’s only one way to get over a nasty experience like that. No, not a new man – a new ‘do! Rita planned to wed to suave Ted Sullivan, and she was going to make sure all eyes were on her.

A special mention must go to the astonishing blow-dry Rita had for the wedding, which added at least a foot to the circumference of her head.

Alas, this stunning colour would not even last as long as the marriage, which was itself pretty brief. Ted was terminally ill, and Rita had reverted to cherry by the day of his funeral. Well, it did look striking with those widow’s weeds.

The 90s saw some of the most daring experiments yet, as Mavis arrived in the Kabin one morning to find Rita sporting what looked like bright orange candy floss atop her dome.

When Mavis went off to live in the Peak District, Rita’s hair told its own story – it seemed to have lost the will to live.

Things had perked up again by the turn of the Millennium, when Rita sung in the New Year in a golden blonde bouffant.

Rita’s old pal Bet returned for a very brief stint in 2002, and all leave was cancelled in the Granada Television hair department. Rita had returned to her familiar copper chroma, but couldn’t compete with Bet’s truly exceptional wig, which had its own agent and has subsequently appeared on Pointless Celebrities.

This picture was taken at the height of the Great Weatherfield Elnett Shortage of 2004. Rita’s hair might have been flat as a pancake, but it had a lovely hue to it. She’d also started wearing a lot of lavender, a colour which beautifully compliments her coiffure to this day.

To be honest, I don’t really remember what’s happening here, but let’s just assume that Audrey is walloping Rita one for going behind her back to get an ombre dip dye from Claudia Colby.

Another wedding, another colour – this time something more subtle to offset the rather elaborate hat and outfit Rita wore for her ill-fated nuptials with Dennis Tanner. In fact, it’s quite hard to tell exactly where hat ends and hair begins.

By the time Rita’s foster daughter Jenny Bradley turned up like a bad penny in 2015, Rita’s current crop was kind of like a greatest hits of all the ones she’s had so far. It doesn’t seem to change that much these days, although I’m not going to speculate as to why that might be (COUGH!). So what’s next? Will Audrey go nuts and give her a corkscrew perm? Personally I’d like Rita’s next storyline to see her deciding to have a go of Jenny Bradley’s Wig of Evil, become possessed by it, then go on a killing spree in the Britain’s Got Talent 9pm special week.

By the noughties, Rita was somewhat prone to being kidnapped by gangsters, held hostage and all sorts of other dangerous situations, so it made perfect sense for her to get Maria to rinse through a new colour that was an exact match for the Rovers Return wallpaper. Next time a crazed gunman pops in on an impromptu rampage, Rita will go completely unnoticed!

Rita’s 2016 regalia, combined with her crowning glory, made her the spitting image of the Workplace Pension character who was appearing in TV ads at the time, reminding people to put a bit away for their retirement. Rita obviously missed those ads, as she’s still toiling away in the Kabin at well past pensionable age.

This behind-the-scenes shot from 2019 revealed that it takes no fewer than two members of the Corrie crew to protect Rita’s magnificent mane in the event of a sudden shower. Just as well, too – they make them go out on that lot in all weathers, and we’d hate to see Rita’s mop droop. 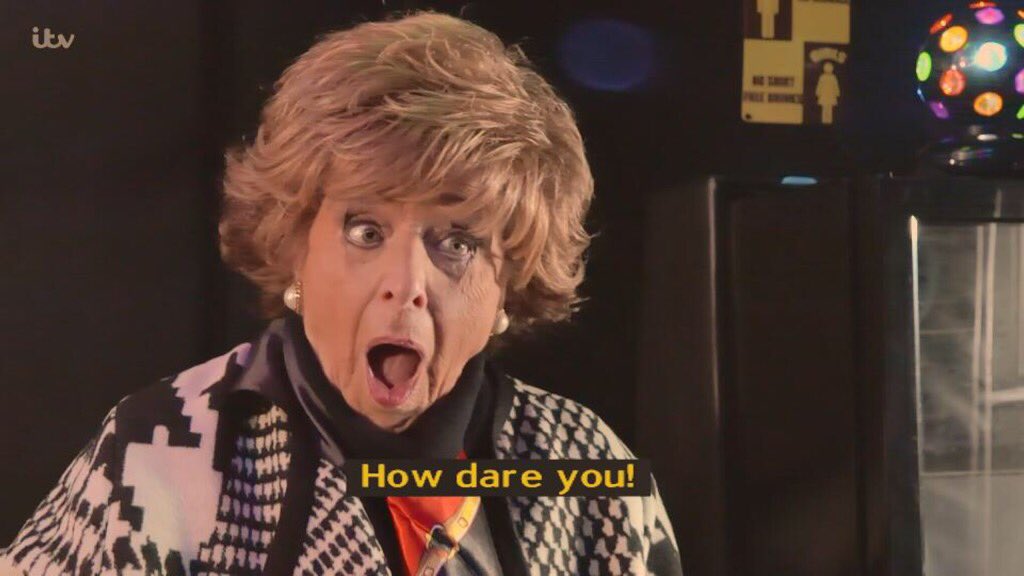 The Street’s residents set out on a coach trip to Blackpool to mark the show’s 10,000th episode in January 2020. In that episode, our Rita had a magnificent set-to with Audrey as they reminisced over Alf, with Audrey speculating that if her Alfie had been ten years younger and five stone lighter, Rita would have been “like a dog with a frisbee”. Harsh, but probably fair!

Alas, we haven’t seen much of Rita in the 60th anniversary year thanks to the coronavirus pandemic – like other senior cast members, she’s been taking a break from filming. But there was a special treat for viewers at the start of the celebratory week – Rita, sporting a smashing Russian Cossack hat to keep the cold at bay. We think producers missed a trick by putting her in a black one – if they’d chosen a vivid orange number, it could easily have passed for Rita’s own luxurious mane.

Let’s hope the sun is shining again soon, and Rita can cast off her furry titfer to dazzle us once again with her iridescent majesty. One thing’s for sure, though – Audrey’s salon will never go out of business as long as Rita is resident on Coronation Street.

According to Marxist theory, cultural forms such as opera, classical music and the literary works of Shakespeare all fall under the heading of high culture. Low culture refers to a wide variety of cultural themes that are characterised by their consumption by the masses. We might not be Marxists, but we do know we still love Footballers Wives. If you do too, you'll know what this is all about.

Back to Top
Close Submit Recipe

Your password reset link appears to be invalid or expired.

To use social login you have to agree with the storage and handling of your data by this website. %privacy_policy%